Building an Age-Friendly region: Trail, Rossland and Montrose collaborate on a strategy

“There are specific challenges faced by seniors in small communities that don’t have all key amenities within their boundaries.”
Roger has lived his whole life in the mountain town of Rossland, BC. Now in his late 70s, he’s beginning to experience some mobility problems—it’s getting harder to get out and about in his community, and to shovel his driveway in the winter. In particular, Roger relies on his ability to drive in order to get to his medical appointments in nearby Trail, BC, and he’s concerned about what will happen if he becomes unable to drive.

Recently, the City of Rossland, in partnership with the neighbouring City of Trail and the Village of Montrose, embarked on a regional strategy to ensure that older adults like Roger can continue to be involved and active in their community into their later years. The communities recently worked together to complete their Age-Friendly Community Action Plans, ensuring the documents contained both aligned regional priorities and plans specific to each community’s needs.

Traditionally, Age-Friendly Community Action Plans focus on planning and actions at a community level. However, Rossland, Trail and Montrose recognized that they also needed to include a coordinated regional approach to address the unique challenges faced by small towns. For example, in regions like the Regional Kootenay Boundary District, groups of smaller communities often share services and infrastructure, meaning locals must travel between communities to access services.

“There are specific challenges faced by seniors in small communities that don’t have all key amenities within their boundaries—such as retail, health services, specialized housing—and these become increasingly difficult to access in neighbouring communities when, for example, you can no longer drive.” says Shannon Gordon, consultant at the Whistler Centre of Sustainability, who prepared the Action Plan. 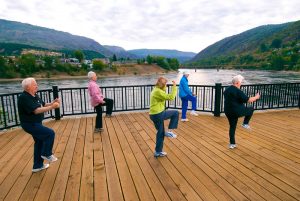 Members of the Trail Tai Chi Club glide smoothly through their routine. By developing its Age-Friendly Community Action Plan alongside the neighbouring communities of Rossland and Montrose, the communities were able to use a coordinated approach that recognized the services and infrastructure they share. Photo credit: Flickr/Province of BC.

Using a regional approach, the communities were able to tackle key challenges that could only be addressed in partnerships with one another, other sectors and other levels of government, such as transportation, housing and health services. At the same time, the process left ample space for each community to look at its own priority projects and actions within its municipality. A task force of about 40 people, including community members, senior service providers, health authority staff, and members from regional and municipal levels of government, used the first half of their meetings to work together on the more region-wide topics, before breaking into smaller groups to delve into topics specific to each municipality.

“That’s one of the things I would recommend—a single task force,” says Gordon. Originally, the process had been planned as three separate task forces that would come together at the end of the process. However, once the communities began to compile their teams, they saw significant overlap and decided to move forward in a single unit. “That was the biggest learning for a regional project.” says Gordon.

Though the plans were just adopted in late 2018, they have already resulted in some subtle shifts towards creating a more age-friendly region by providing municipal staff and councils with an enhanced ability to look at potential projects in the context of aging and older adults.

“One of the benefits of a planning process like this is that participants develop an additional lens for decision-making—in this case a new awareness of what age-friendly means, what the challenges and priorities are. So staff and council can apply this new lens to what’s already happening and what’s on the table in front of them, and some age-friendly benefits can emerge quickly.” says Gordon. “For example, one of the things we talked about in the planning process was that new developments should be flexible and friendly for people of all ages and abilities, including those with mobility issues. Something now on the radar amongst participants is that small elevators are not that expensive to build in or leave space for in new developments, but they’re expensive to retrofit later on.”

One of the most important outcomes of the age-friendly planning process is that connections are strengthened between service providers in the region, allowing them to collaborate and coordinate their efforts.

“There’s another immediate benefit. The service providers become better connected, they have a better idea of what the other is doing. And sometimes it results in at least the ability to refer better—when a senior calls them with a certain issue, they have better knowledge of the different resources to refer to,” says Gordon.

It’s a small but substantial first step in the right direction, meaning that Roger—or another older adult who needs support or assistance—is more likely to get the assistance he needs to continue his aging journey in health and happiness.

Shannon Gordon’s recommendations for communities looking to take on a similar project:

We use cookies to ensure that we give you the best experience on our website. If you continue to use this site we will assume that you are happy with it.AcceptPrivacy policy